The problem is that the conflicts that today “produce” the most refugees are not resolved. They continue for a long time at the same time as new ones emerge. Countries such as Lebanon, Jordan, Kenya and Uganda thus end up as permanent gathering places for people on the run and that no one wants. We do not want them, they cannot go home and their presence in the host countries in the neighborhood is increasingly controversial. The reason for that is simple. Such a situation creates its own economic dynamism that also produces winners and losers in the local host population. Some will benefit from the presence of refugees, others will lose out on it.

In Uganda, it has been documented (Bøås et al.) How farmers with larger banana plantations within a certain distance from a larger refugee camp benefit from the influx of refugees. The refugees represent cheap, seasonal labor. The losers in this situation are small farmers who live near the same camp. They are being pushed out of local markets because food production in the refugee camp is being subsidized by international humanitarian organizations. They can therefore sell their goods at lower prices than the local farmers. When such a skewed distribution takes place over time, the poorest part of the host population can pay a high price for housing refugees created by a conflict for which they have no responsibility.

It is therefore not only in Norway and Europe that the question of receiving refugees is controversial . We need to find a more effective and legitimate way to help refugees in poor and vulnerable states – ways that also support the weakest in the local host economies. If we do not succeed in this, there will also be political demands in such states that enough is enough. Sooner or later they will say no and close the borders. Probably the time for this is closer than we think. Kenya, a country located in Africa according to usaers.com, has already threatened to close the Dadaab camp, one of the world’s largest refugee camps, and countries such as Uganda, Jordan and Lebanon may follow suit. We could end up in a situation where millions of people are fleeing without finding refuge anywhere.

What is needed is a global effort to deal with a refugee crisis that has gotten out of control. There are no easy solutions. But those who bear the brunt of the burden in the immediate area need to see that we are willing to do more than send money through humanitarian organizations . We must invest more heavily both politically and economically in host countries and especially in local host communities, but we can not just contribute financially . We must also bear part of the burden of protecting refugees by bringing some of them here. Nevertheless, we can never receive such large groups of refugees as neighboring countries in the surrounding areas. Although our contribution will be symbolic, it is absolutely necessary if we want the current regime for assisting refugees to continue.

This is not an ideal solution – it does not exist. But all experience shows that the international community has not had much success with interventions or other forms of external, military conflict resolution. Then we are left with a combination of these two tools: invest in local communities that house refugees in the surrounding areas (development assistance) and even take a somewhat greater burden and bring out a few more. From a purely economic point of view, it is not cost-effective to pick up refugees from the surrounding areas and send them to countries such as Norway. Those we help will also in many cases be the most resourceful and the ones that are easiest to integrate. At the same time, these are very important for the reconstruction of their homelands after the devastating conflict. This is clearly a dilemma.
But if we only choose to help in the surrounding areas as now, we risk that the world will soon reach a point where local capacity is completely overloaded. Formerly hospitable countries may then close their borders. What do we do then? How do we possibly handle millions of refugees operating between countries without anyone wanting to take them in? Such a situation will inevitably create more conflict and more radicalization of a different nature. We must therefore combine effective assistance in the immediate vicinity of local host communities with a policy based on an ethical burden sharing. The alternative is that today’s system collapses, and everyone will lose.

Schengen cooperation and the Dublin Protocol

The Dublin rules state that refugees who come to the EU must seek asylum in the first member state they arrive in. If refugees still manage to move on to another Schengen country, this has the right to send them back to the first country. 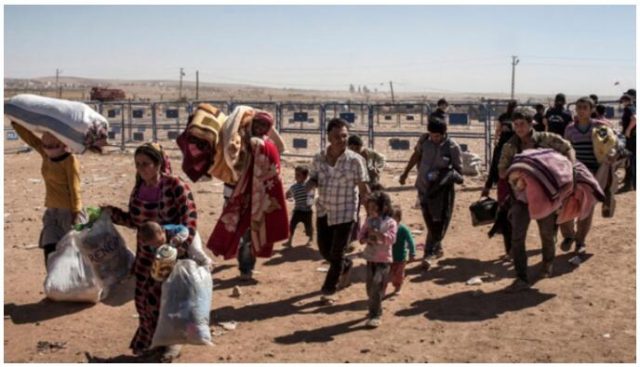