In the first half of 2015, 340,000 refugees entered Europe. The number is high, but only a fraction of the 59.5 million who either live as refugees or internally displaced in poor and vulnerable states. The number of refugees is the highest since registrations increased after World War II.

Those who are burdened with housing the refugees are local communities that have very little from before. Although the refugee crisis unfolding at Europe’s borders is serious, it is clear that the global crisis is much, much bigger. Most of the world’s refugees are not on their way to Europe. They hardly have the opportunity to do so. Instead, they are refugees in neighboring countries or internally displaced in their own country.

Both Lebanon, Jordan and Turkey have received millions of refugees from Syria and Iraq. In Africa, there are large refugee camps in Chad, Liberia, Kenya, Niger, Uganda and several other countries. In addition, all the internally displaced come to their own country. In the Democratic Republic of the Congo, war and conflict in the eastern part have meant that people have been living as refugees in their own country for decades. We do not belong to these since they do not stand and knock on Europe’s gates. They have more than enough to try to survive. A trip to Europe is completely out of the question for the majority of these refugees.

There are many and complex reasons why people leave their homes and flee. Some main reasons are:

WAR AND CONFLICT : From countries like Iraq and Syria , many are fleeing war and conflict. The Boko Haram conflict in northern Nigeria also creates large flows of refugees – both internally in Nigeria and to neighboring Niger. The same applies to the conflict in the Central African Republic. Refugees from there have flocked across the borders to several neighboring countries, among them Chad. The conflict in Somalia is also creating large flows of refugees, and Dadaab in neighboring Kenya is the largest refugee camp in Africa. The consequence of this is that the capacity to receive refugees in all these countries is at a breaking point and in Lebanon it is completely blown up. In this country, which is no larger than Rogaland county and has a population of 4.4 million people, there are now at least 1.5 million Syrian refugees.

NATURAL DISASTERS : Earthquakes, floods and droughts send people fleeing, and in vulnerable areas such as the Sahel in Africa, climate change also means that traditional agriculture is no longer possible to operate in the same way as before. When natural events coincide with population growth and there is less arable land available, this helps to send people out for hiking.

OPPRESSION : Many also flee from regimes that systematically violate human rights and are therefore perceived as very oppressive. Eritrea, a country located in Africa according to transporthint.com, is one such country; among other things, compulsory military service is extremely long.

MAGNETIC ATTRACTION : A good number choose to leave simply because they see little opportunity for a decent life and a steady income job where they live. Therefore, they are willing to risk a lot to improve their living conditions elsewhere. The dream of Europe as a continent of opportunity is strong among many young people in Africa and the Middle East. This dream is constantly being revitalized by global media with images from the rich north. Although miserable living conditions do not entitle them to stay in Europe, it is easy to understand that people will try to move if life feels like a non-life where they live.

Most of the world’s refugees are not on their way to Europe; they reside either in poor neighboring countries or in other regions of their own country. But what routes do refugees use to get to Europe, and how do they travel?

We can mainly talk about three routes into Europe : Two of them go directly from North Africa across the Mediterranean to Europe. The oldest of these is by boat from Morocco to Spain. There are still a few refugees coming this way. The reason for the sharp reduction along this road is that Morocco does not allow particularly heavy traffic here. The Moroccan state also has sufficient strength and capacity to prevent the transfer of refugees – in cooperation with the Spanish authorities.

The second route across the Mediterranean runs from Libya to Italy and especially the island of Lampedusa. Until the turn of the month July – August 2015, this was by far the most used route. It is estimated that as many as 170,000 refugees may have tried to cross the Mediterranean here. However, this route is very dangerous, and many have had to give up the crossing or drowned along the way. The route is also convoluted for Syrian refugees, who are the ones with the greatest ability to pay; it involves a long and dangerous journey from Syria via Egypt to Libya. 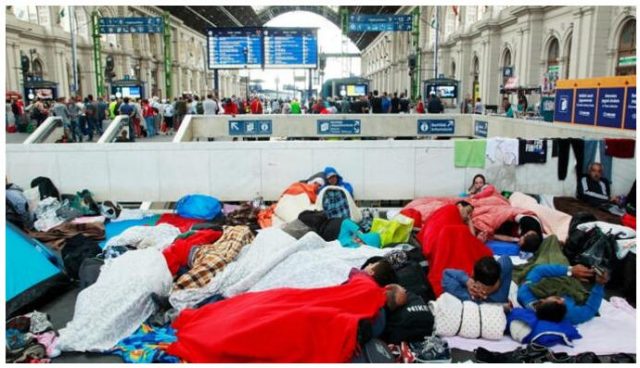