We work to promote the influence of young people, ensure the rights of women and support vulnerable groups plagued by conflict, war or occupation.

Did you know about the Arab region?

According to a2zgov, the region is characterized by poverty, political instability, marginalization, oppression on many levels and social, political, economic and cultural discrimination against women. We therefore work to promote young people’s political influence, ensure women’s rights and assist vulnerable groups affected by conflict and occupation.

The Arab region has historically been plagued by authoritarian regimes and a lack of respect for human rights. During the Arab Spring in 2011, hundreds of thousands – with the youth as frontrunners – took to the streets, protesting against the incumbent regimes and demanding political reforms and more influence on decision-making processes. Several dictators had to succumb to the demand for democracy, but the first budding signs of democratic development have since suffered a miserable fate, and in several countries the room for maneuver for civil society has since been further curtailed. And the political and civil rights of the people continue to be curtailed. . The Arab Spring, however, has always changed the peoples’ self-perception and desire to influence political decisions, and created space to discuss and demand rights, freedom and good governance.

As part of the Arab Initiative, Inter-People’s Cooperation administers a pool from which Danish and Middle Eastern NGOs can apply for support for partnership projects in the Middle East and North Africa (MENA region).

Young people between 15 and 24 make up a third of the population of the Arab region. They have the potential to do things differently and create new visions and political alternatives to overcome the challenges facing the region today, but there are many barriers to overcome before this can be achieved: a patriarchal society, limited access to decision-making processes and a top down learning environment, which promotes passivity and maintains traditional gender roles. But recent years have changed young people’s self-esteem, and they are beginning to see themselves as active political agents.

Mellemfolkeligt Samvirke therefore works in collaboration with local partners in the Middle East to strengthen the capacity of young activists, marginalized groups, popular movements, youth groups and civil society organizations, so that they can challenge and seek influence on social and political change processes. We support the mobilization of young people and civil society actors to create joint campaigns, implement local change projects and hold local authorities accountable. And then we work to increase intercultural understanding and dialogue between young people in the Arab region and Denmark as well as support partnerships between organizations across the regions.

Women in the Arab region do not have the same rights and opportunities as men. Stereotypical gender roles as well as religious and social conservatism restrict women’s movement and participation in all spheres of society. Mellemfolkeligt Samvirke therefore works to promote women’s rights and strengthen the opportunities of marginalized women to challenge discrimination and participate actively in their society.

Specifically, we focus on mobilizing and organizing young men and women to challenge gender-based violence, discrimination and rights violations, as well as strengthening existing women’s rights organizations and initiatives and establishing regional networks and platforms for sharing experiences.

The Arab region is also characterized by a series of conflicts and unrest. Not least, the continued occupation of Palestine results in rights violations and is a source of regional conflict. The many conflicts, which also include the ongoing civil war in Syria, have serious consequences for both the development and the fulfillment of human rights in the region. That is why Mellemfolkeligt Samvirke has initiated initiatives that connect our rights-based democracy work with relief efforts .

Among other things, we support Syrian refugees in Lebanon and Jordan in organizing themselves and jointly identifying and meeting their most basic needs. At the same time, we are working to build the abilities and self-confidence of Syrian women and young people to take the lead in the future and play an active role in building a new Syria. We also put them in touch with the surrounding communities to create solidarity, and jointly articulate the humanitarian challenges that both parties are experiencing as a result of the Syrian refugee flow. 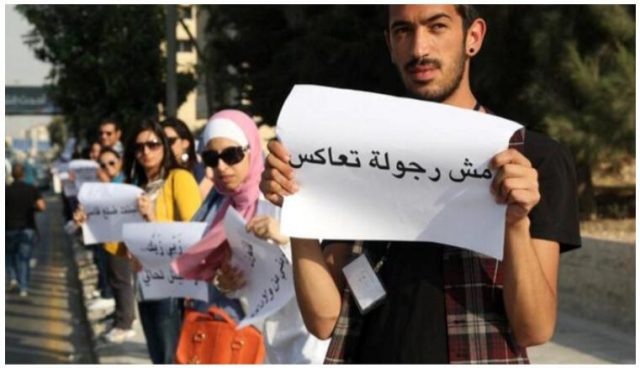