Since 1952, Nepal has received continuous state and private aid in the form of loans, grants and technical assistance from abroad. The unstable political situation in recent years, the frequently changing government coalitions, inefficient administration and widespread corruption have all contributed to a lack of continuity and coordination in the implementation of development programs. Despite high per capita development aid compared to other South Asian countries, Nepal remains one of the poorest countries in the world.

According to programingplease, the Nepalese government presented its Poverty Reduction Strategy (PRSP) to the International Monetary Fund (IMF) and the World Bank in 2003. Several PRSP Progress Reports were then published. The Millennium Development Goals (MDG) for Nepal have been integrated into the poverty reduction strategy.

After the Post 2015 process, which resulted in the adoption of the SDGs, Nepal is involved in the 2030 Agenda for Sustainable Development. There are significant deficits in most areas.

The number of Nepalese NGOs is large. Their total number is estimated at around 70,000. The umbrella organization of NGOs (NGO Federation of Nepal) has around 4500 members.

Help after the earthquake disaster

After the severe earthquake that shook Nepal on April 25, 2015 and wreaked havoc in the Kathmandu Valley and the mountain villages of the Himalayas, 400,000 families needed help. A total of around eight million people were affected by the earthquake. Tens of thousands of houses were destroyed and the country’s infrastructure was badly damaged.

The local military and police forces received support from foreign rescue and medical teams from several countries, the large neighboring countries India and China, as well as from Japan, Bhutan, Russia, France and Germany, among others. The aid was coordinated by the UN Office for Emergency Aid Coordination (OCHA). The aid organizations complained about the lack of government guidelines for the necessary reconstruction. In the first months after the earthquake, aid agencies brought medicine, food and tarpaulin to Nepal. After that, they focus on the distribution of relief supplies and construction of temporary accommodation and schools.

Donations from development cooperation have made a substantial contribution to the Nepalese state budget in the past few decades. Even today, Nepal is largely dependent on foreign aid.

Important actors in international development cooperation in Nepal are the United Nations, the Asian Development Bank, the International Monetary Fund, the European Union and the World Bank. Numerous international non-governmental organizations are also active in Nepal.

The main bilateral donors to Nepal are Japan, Great Britain, USA and Germany. 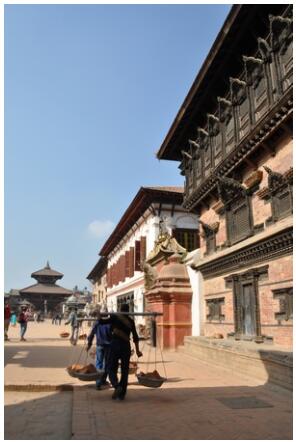 Nepal is a partner country of German state cooperation. The main focus of the cooperation lies in the areas of health care, renewable energies (solar, hydropower and biogas) and energy efficiency, as well as sustainable economic development and trade. In addition, Germany supports the peace process in the country through advisory services and participation in the United Nations Nepal Peace Trust Fund. The new municipalities created in the course of the territorial reform are supported in matters such as municipal administration and good governance.

The Friedrich Ebert Foundation has its own office in Kathmandu. Other political foundations (Rosa Luxemburg Foundation, Konrad Adenauer Foundation, Hanns Seidel Foundation) work together with partners from Nepal as part of their regional programs for South Asia.

As part of bilateral development cooperation with Nepal, Germany provided new funds totaling 48 million euros for the period 2014 and 2015. At the German-Nepalese government negotiations in December 2014, it was agreed that most of these funds would be used in the priority areas of cooperation: sustainable economic development and trade (15 million euros), health (25.5 million euros), and renewable energies and energy efficiency (5 million euros)

At the bilateral government consultations in June 2016, in talks with the Nepalese Ministry of Finance and the National Reconstruction Authority, the German delegation promoted improving the framework conditions for civil society reconstruction projects. The private donations for the survivors of the earthquake in Germany amounted to approx. 116 million euros. In 2016-2018, 36 million euros were used to continue development cooperation.

At government negotiations in September 2018, funds totaling 55.6 million euros were pledged to Nepal.