The history of Greek literature begins for us, as in substance it began in the concept of the ancients, with Homer, that is, with the epic that flourished in the Greek colonies of Asia Minor, especially among the Ionians. But this does not mean anything other than that the Homeric poems were the most ancient work, of some extent and of artistic value, which was consigned to writing and therefore entrusted to historical tradition. In fact, the writing, of Northern Semitic origin, was accepted (and then perfected) by the Greeks of Asia Minor, especially the Ionians, between the century. IX and VIII a. C., which is precisely the period to which the composition of the epic is traced back for other reasons. Then, with the alphabet, the most powerful means of expression is introduced, the transmission and development of every culture; here is the way out of prehistory and therefore also to inaugurate literary production.

In reality, however, Homer finds himself, not at the beginning, but at the end of a long and fruitful development, in which the materials and the form of the epic were being elaborated and, together with this, other forms and artistic inspirations. This results, in an irrefutable way, from the content and the constitution of the poems, from the examination of the mythical-religious heritage, of the language, of the style, of the meter, and in particular from the archaeological discoveries. The discovery of the Aegean-Mycenaean civilization – that is, of one or more previous civilizations produced in the eastern basin of the Mediterranean during the second millennium BC. C. from both Hellenic and non-Hellenic lineages, of which Homer, if he is no longer a direct witness, also vividly collects the reflections – was in this regard the first great revelation.

But this concept is associated with another that does not seem to have faded yet, and which is of preliminary importance, involving the whole problem of origins: for which absolute originality is usually affirmed (it is better to say, so as not to misunderstand, originality) not only of Homer, but of Greek literature in general. The Greek literature, unlike the following ones, would have arisen in a completely spontaneous, isolated way, not nourished by elements and examples neither parallel nor previous; it would have made itself, creating its means, its marvelous forms (genres) both in the field of art properly understood and in that of thought, to then communicate them as a perennial inheritance to other peoples. These statements, like the one concerning Homer, derive from a complex of sentiments and ideologies, spread by the romantics at the end of the century. XVIII and at the beginning of the XIX, when Hellenic prehistory was still to be explored. Now archaeological investigations, not only those from which the Aegean-Mycenaean civilization came to light, but other more recent ones, from which important results have been obtained in the interior of Asia, warn us that even the Greeks, in their beginnings, they had relations, directly and indirectly, with the civilizations of more advanced nations: Babylonians, Hittites, Phoenicians, Egyptians; from these they drew elements not only of practical life but also of spiritual life: figurative art, mythology, religion, science, music, poetry. The more we continue to dig into the layers of prehistory, especially among those peoples of Asia Minor (Lici, Phrygians, Carî, etc.) on which the Greek colonies of the Ionians and Aeolians overlapped, the more the genesis of the epic and of all ancient Hellenic literature will presumably be illuminated with a new light. That the most ancient literary production arose in the land of colony, and precisely in Asia Minor, is not without significance: because that was the condition and that the place where the influences of oriental peoples crossed more easily, bringing all sorts of elements and stimulating the creative energies. These in the Greeks proved to be very powerful and markedly superior; hence they at a good point assumed the primacy of civilization and created in the spiritual order more than what had been suggested or attempted by others.

To distinguish poetry, the so-called poetic and literary forms, from the rest in the origins of Hellenism, is absolutely inappropriate. In the same way as it is never permissible to separate form from content, so we must not separate poetry from the elements that constitute it, from the inspiring sources, from the language (which transmigrates not as a sign, but as a spiritual heritage), from the verse (which it is not pure sound, but inner ghost), from ideas and images. The epic, or rather, to be exact, all the ancient poetry of Hellas, whatever form it takes, and in meter and without meter, is essentially an expression of myth. The myths, be they the noblest ones, of the divine and heroic legend, are the humblest ones, of the novel and the fable (particularly Aesopic), they constitute a patrimony that is not only vast but of various origins; that the Greeks partly created on their own, with truly exceptional fantastic fertility, but also partly recreated it by drawing it from others, and communicating it to others through all the ways of trade and colonization. Therefore mythology (or, better said, the “mythopoeia”) – understood in this broad sense that involves almost the entire primitive faculty of human conceiving and poetry (conceiving through images, both religiously, philosophically, and purely fairy-tale ) – is the great bond that binds Greek poetry to its prehistoric antecedents. Greek poetry was born, earlier than in Homer’s poems (and even before in any isolated epic songs belonging to Homer), in the anonymous but certainly not shapeless work, not separated from adequate expression, of the infinite narrators who from the earliest times began to populate their vision of the universe with fantastic creations.  The mythical-narrative ideas, which were not only Hellenic, but also derived from other nations, were the first models of the epic. And from there also arose, in general, the other poetic and musical forms; in which the same remoteness of origins is demonstrated, or sensed. The names of hymn, elegy, iambo, dithyramb, in which not only certain types of verse are announced, but as many literary genres; and the names of several musical instruments, first of all the zither, appear to linguistic analysis to be of non-Hellenic but pre-Hellenic origin. Names: and therefore things too. 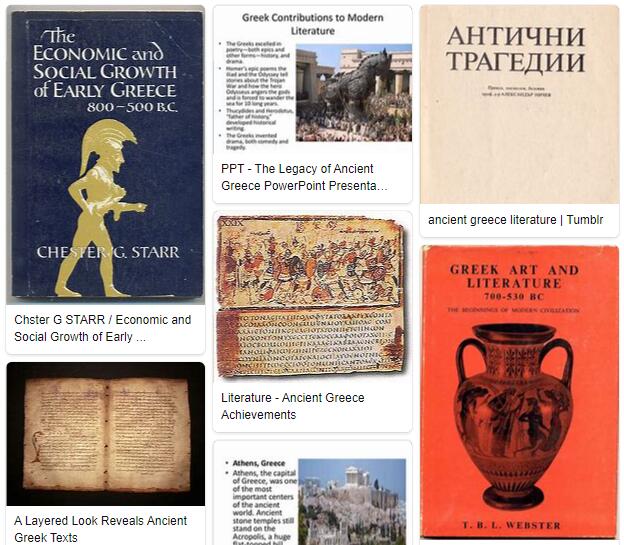